The 6 Best Places for Desserts in New Mexico! 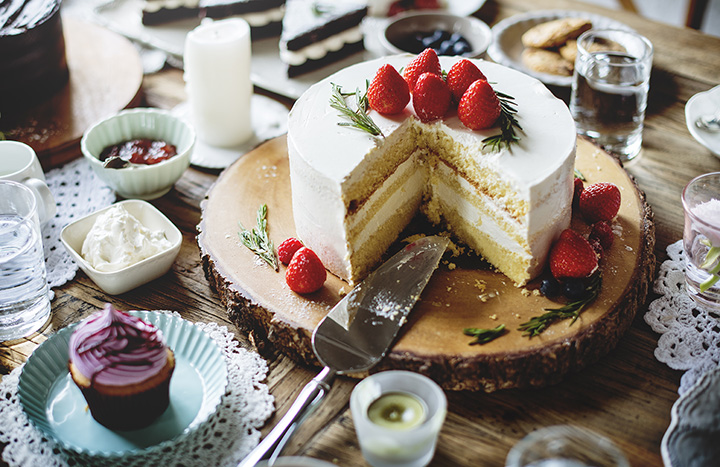 If you think the best part of any meal is dessert, then these New Mexico restaurants will tantalize your taste buds with delectable sweet treats. Check out the dessert menu before you order and save room for an end-of-meal indulgence! Here are our favorites.

Right after you make the left turn off Highway 70 heading into town, keep your eyes peeled for a tiny cottage with a small sign in the window that says cafe—that’s Tina’s Café. Don’t be fooled by the exterior. Step inside and you’ll smell the aromas that happen when food is homemade. Dessert here is all about pie, which are indeed made daily. Green chile peach and apple pie top the list of favorites, but the red chile pecan pie is not far behind. All three blend the sweet and spicy to perfection for an incredible taste that will having you coming back for more. Take a slice or a whole pie with you for an anytime snack.

The proof of any pudding is in the eating. Once you try the signature dessert, Butterscotch Budino, at this artisanal pizzeria, you’ll realize just how spectacular it is. Budino is Italian for pudding, but this treat is not your standard fare. The thick, rich creamy confection is smothered in a caramel sauce studded with large crystals of sea salt, then topped with fresh whipped cream and a sprig of mint. Cap off a meal of your favorite pizza with his deep buttery, velvety sweet delight.

Sometimes it’s fun to have dessert as a first course instead of the last, and this is the place to do it! Since 1998, the family-run restaurant has been making all sorts of handmade pies. The rolling pins are in use all day, flattening dough for dozens of different fruit, cream, and chile pies. Favorites include New Mexico apple with green chile and pine nuts, cheer-y cherry, peachy keen, chocolate chess with red chile and coconut, chocolate or banana cream. There’s even a pie bar where you can pick a favorite slice or two. Add a scoop of ice cream and make a meal of it.

The word nymph conjures up visions of frolicking spirits. Imagine those spirits as sugar crystals dancing across your taste buds. That’s how good the desserts here are. The triple layer chocolate cake is transformative. You might not ever find a better cake in all your travels. The light and airy cake is layered and topped by a rich and decadent chocolate frosting. One slice is enough for two to four people, but you might not want to share this giant slice of dessert ecstasy. If chocolate isn’t your thing, the organic carrot cake with a liberal topping of tart cream cheese frosting is a good second choice.

New Mexico’s official state cookie is the biscochito. It received that designation because it is so mouthwateringly good. The butter-based dough (or lard-based depending on the chef) is flavored with cinnamon and anise and baked to a crisp perfection in the shapes of stars and crescent moons. The Chavez family, owners of this delightful bakery, have been making these traditional Spanish cookies for more than 30 years. Order some with a cup of hot chocolate for a customary end to a New Mexican meal. Take a bag for the road, you’ll want more.

Close to 30 hand-crafted ales and lagers are available at this local brewery. Not dessert fare, except when their house-made root beer is paired with vanilla ice cream and morphs into a root beer float. That cool, refreshing summertime memory is recreated as a dessert at this local pub. The base beer is an intriguing blend of flavors with hints of anise, sarsaparilla, wintergreen and sassafras. Once poured over chilled ice cream, it creates a frothy head that, spills over the rim of the glass in an effervescent river of deliciousness. Licking the glass is appropriate.