The 7 Best Omelets in New Mexico! 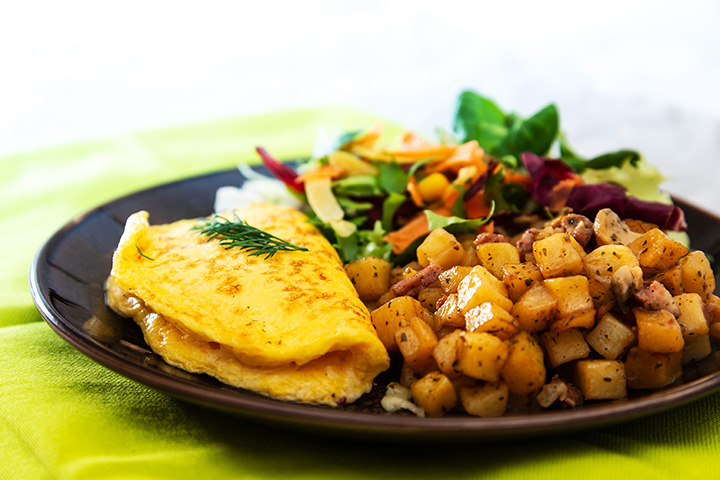 Those in the know say that breakfast is the most important meal of the day. There’s no better way to begin than with a dish of lightly beaten eggs cooked in butter then folded over a delicious assortment of meat and cheese and vegetables. You’ve got to crack a few eggs to make an omelet and these 7 New Mexico restaurants know how to do it just right.

This small cafe is big on omelets. There are five on the menu, from the standard three-egg to Denver, cheese, veggie and the Adobe with grilled ham, green chile and cheese. But you can also build your own from a wide-range of choices in-cluding a variety of meats and cheeses and a cornucopia of vegetables. This fluffy egg creation comes with hash browns and toast.

It’s fitting that this French bakery serves lighter-than-air omelets since the sump-tuous, custardy breakfast fare has its origins in France. They are made in the traditional French style, with ingredients gently rolled inside. You might feel like you’re in the French countryside with omelet selections like Jambon Fromage, ham and cheese or Provencale, with veggies dusted with herbs de provence. Add a croissant and say merci!

There isn’t just one Jimmy at Jimmy’s, there are hundreds. Caricatures of famous Jims, Jimmys and Jameses adorn the walls. If you look hard enough you might see famous chef James Beard who knew his way around an omelet. So do the chefs here. The four-egg meal is huge as is the selection. There are eight from which to choose. Popular choices are the Philly cheesesteak, the three meat and the chicken and veggies. All served with hash browns or fruit plus toast or a tortil-la. Breakfast is served all day.

If you only ever eat one omelet in New Mexico, have the brie omelet here. Three beautiful eggs are lovingly cooked in butter then stuffed with brie, green chile and potatoes and topped with diced tomato. The creamy brie seeps into the other in-gredients for a melt-in-your-mouth delight. Although the Spanish tortilla omelet does give this one a run for its money, it’s the basil pesto and the warm cucumber, mushroom and tomato salsa that puts it over the top.

Breakfast is served all day here and has been for more than 60 years. Established in 1948, it is the local meeting place in the city for residents and visitors. The diner fare is a blend of southwest and American food. Omelets are big, soft and delicious. Combinations include the Durango with ham, cheese, sour cream, green onions, mushrooms and smothered in green chile, the chile relleno which is stuffed and topped with red or green chile. There’s a three-egg cheese and a veggie. All come with pantry fries, grits or beans plus biscuits and gravy.

The menu here pays homage to founder Big George, who’s family stills runs this unassuming diner that serves classic food. There are lots of meals named after him, but none better than George’s 22nd Century big omelet or George’s Butt-Burner that claims to have enough vitamin C in the ingredients to cure the common cold. Other omelets run the spectrum from bacon to cheese to vegetarian. This family diner has been filling people up for more 30 years—a great find in the southern part of the state.

The small green cabbage like vegetable, known as the brussel sprout, is nowhere to be found on this menu, but that’s ok because the omelets come served with two Liege waffle, the quintessential thick kind the restaurant’s namesake country is known for. This is a make-your-own omelet creation place. You get to begin with three eggs, but from there the culinary combinations are plentiful— merge vegetables, meat and cheese in a variety of combinations to get that morning meal just right.