9 Best Things to Do in Albuquerque, New Mexico 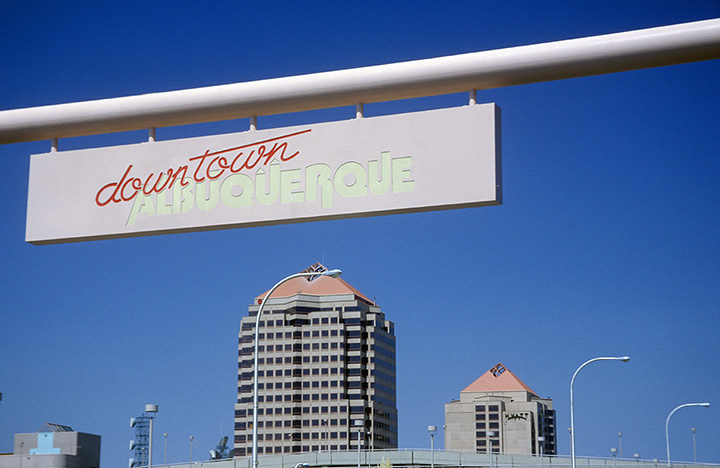 Albuquerque, the most populous city in New Mexico, is a beautiful, historic and culturally diverse place to explore. It straddles the Rio Grande. Route 66 runs right through it. Its footprint is a distinctive blend that merges the past and the present. Here are the best things to do in the city!

A visit here should begin with a stroll through the historic section of town—the heart of city. Founded in 1706, it’s now the cultural center of the region and is peppered with museums, restaurants, shops and galleries. Spend some time at the San Felipe de Neri Church, the oldest in the city, and wander the streets absorbing the best of southwest ambiance found in the Pueblo-Spanish style architecture, the aromas and history of New Mexico.

This museum pays tribute to the state’s official gem, turquoise, one of the oldest and most iconic gemstones of the Southwest. The museum was founded in 1993 by a local family who has been part of the turquoise industry for five generations. Examples from more than 65 mines from four of the seven continents are on display. Take a guided-tour complete with hands-on exhibits. Stop in the gift shop for a look at a variety historic pieces and see the difference between the real and the fake.

Just about 10 miles from downtown Albuquerque is this park, located on the Rio Grande flyway. Birds are abundant and there are indoor and outdoor wildlife viewing areas. Exhibits at the visitor’s center include information on the local riparian environment. Trails lead into a cottonwood forest known as the Bosque. Year-round feathered residents include Cooper’s hawk, great-horned owl, ring-necked pheasant, black-capped chickadee, great blue heron and the hairy woodpecker. Bring your binoculars!

A yellow, orange and red alien mascot named Orbit bounces around the home stadium where this minor league baseball team plays, April through September. The team’s name, Isotopes, is a nod to a Simpson episode, but also pays tribute to the science and military influence that helped define the state. It wouldn’t be a day at the park without eating a hot dog. Try the Enchilada Dog, topped with red chile, ground beef, shredded lettuce, diced tomatoes, white onion and tri-colored tortilla chips. The 11,000-seat stadium has a little something for everyone—beer, food, kids zone, live music, and a first-rate team to cheer for.

Bisocchitos, an anise and cinnamon butter cookie, are the state’s official cookie and you can find them here in a variety of flavors—blue corn, chocolate, cappuccino, original, and sugar free. Also on the menu are empanadas, New Mexico wedding cookies, small and large bolillos and a New Mexican green chile bread that tantalizes the taste buds. The family-owned bakery has been in business for more than 40 years, creating memorable treats for families, businesses and visitors.

In the 1940, the Mother Road, aka Route 66, went right through town bringing tourists in droves through the area. This lodge is a throwback to that time. The rounded parapets, irregular style construction and wooden vigas are typical of the Pueblo Revival style architecture that was so popular at the time. You can’t miss the giant arrow with flashing gold lights pointing out the entrance or the neon sign identifying this landmark, listed in the National Register of Historic Places in 1998.

With a mission to combat hate and intolerance and promote understanding through education, this small museum is packed with a powerful message. Exhibits focus on “historical conflicts caused by prejudice.” The Holocaust, genocide against Armenian, Greek, Rwandan and Christian minorities in Europe, the cruel treatment of the Native Americans and slavery in the United States make a profound statement on the instances of hate throughout history. Sobering, but enlightening and thought-provoking.

The beer, and the decor, are unique at this veteran owned and operated brewery housed in a transformed warehouse. Everything is handcrafted from the furniture to the fixtures to the taproom. The 16 taps pour IPA, stout, pilsner, blonde ale. lager and a variety of other beers. The military-themed bar is decorated with a scattering of decommissioned munitions, dummy ammunition and World War II comics. Even the beers are named after military sayings and phrases. No drill instructor and no saluting—it’s just a casual place to have a beer.

A trip to Albuquerque wouldn’t be complete without taking time to see where much of the popular series, “Breaking Bad,” was filmed. Get onboard an RV, from the show, driven by guides who were either extras or actors on the show. The tour takes you to most of the series iconic venues. See where the Candy Lady’s blue sugar rock candy is made. Stop by Rebel Donut for a tasty doughnut. Grab a snack at the Dog House Drive In. Check out the Octopus Car Wash. A great trip down the memory lane of the show’s five seasons.