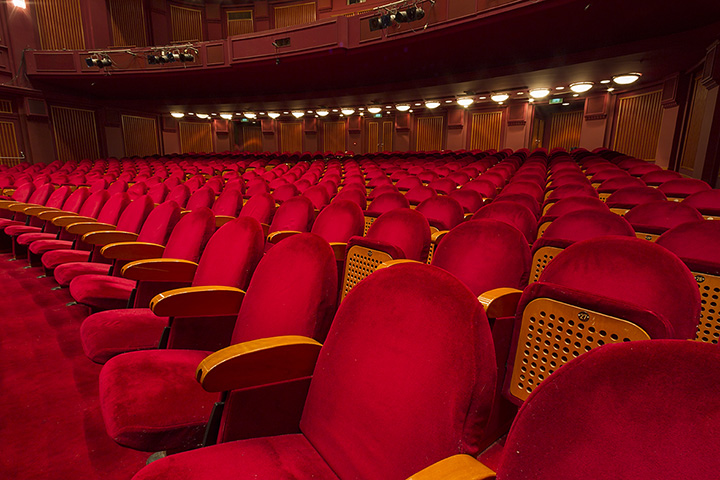 The history of theater runs deep, and in New Mexico, you’ll find lavish buildings that have been an important part of the state’s culture for decades—some even a century. These beautiful theaters represent an era of architecture and culture. With these iconic spaces being maintained, restored, and renovated, you can still catch live performances in them today. Here are 7 incredible historic theaters in New Mexico.

Coal mining dominated this town for more than 100 years. When mining stopped, the town regrouped and is now a hotspot on the Turquoise Trail. The theater, housed in train engine repair shed from the 1900s, seats about 135 people who can cheer and boo at the actors in the old-time melodramas that take place in summertime. There’s a full-size steam engine on stage, old maintenance pits along the aisles, soot and steam stains on the roof and a balcony made from railroad tracks.

Silver and copper mining helped establish the town in its earliest days. The name SilCo pays homage to that history. This theater went through a number of transformations—movies, furniture store, mini-mall, boutique—until it was refurbished and reopened in 2006 as a movie theater and facility for events and meetings. It has a one screen, 156-seat all digital movie screening room and a lot of small-town charm.

This 1950s-style movie theater, operated by Frontier Theatres, was originally named the Sierra Theater and boasted a 17-by-38-foot screen. In the 1980s, it was purchased by a local resident, Margaret Flickinger, who donated it to what is now known as the Flickinger Center for the Performing Arts organization. Now, this refurbished 600-seat theater offers a variety of entertainment from concerts to plays and musicals to dance recitals by both professional and amateur groups and is a performing arts anchor for the downtown.

In 2009, the town purchased this historic theater, a source of community pride and a popular landmark. Originally built in 1915 as the Mission Theater, it changed hands and was renamed the Luna Theater in the 1930s. Because of its mission/Spanish revival and Art Deco-style architectural components, it was listed on the National Register of Historic Places in 2007. At one time, the basement was a ballroom and roller rink. Now, the building is a legendary venue for movies, with updated digital projection and surround sound. The winking, smiling moon face on the marquee is a delightful, working blast-from-the-past.

Billed as a “castle of pleasure and art” in 1928 when it opened, this Carl Boller designed building with its Spanish Colonial-style exterior was restored in 1991 and is now used for film exhibition and performing arts. The 450-seat theatre, which shows popular movies, is outfitted with Dolby Digital Sound and a high-end Christie Digital projector. The atmosphere is reminiscent of the movie heydays of the 1940s and 50s when going to the movies was an event. Lots of fresh popcorn, hotdogs and comfortable seats.

Richard Smith at the 13th Annual UFO Film Festival in Gallup NM. Yours truly. This weekend. Be there. http://event.ufoteacher.com

This more than 100-year-old theater was built at the turn of the 19th century as a place for opera, live theatrical performances and concerts. Today, its original purpose lives on, continuing to showcase live plays, drama, comedies, musical theater and concerts for all ages for the local community. Renovated in the 1960s, the interior has some beautiful remnants from its earliest days including three original drop curtains depicting beautiful scenery, an original restored box seating area and eight WPA (Work Progress Administration) murals by artist Manville Chapman from the 1930s showcasing Raton in the 1840s. This beautiful building is a Registered Cultural Property in New Mexico.

Known as the Puccini Building, this historic theater is the setting for what could be considered a modern-day opera. It’s named for Luigi Puccini, cousin of the famed 1920s opera composer Giacomo Puccini. Luigi’s future wife thought she was going to meet the famous composer, but instead, upon meeting Luigi, fell in love with him. They built the El Rey as a movie theater in the 1940s. It’s been in the family, off and on, since then. Now, as a Registered Historic building, this lovely example of Mediterranean architecture, the only one in the state, is a cornerstone of downtown as a live music and concert venue.

Once Upon A Theatre

13170-B Central South East, suite 130, Albuquerque, NM
About Us:Once Upon A Theatre, a non-profit New Mexico corporation, is a touring theatre company dedicated to improving the education of children in... Read More

6320 Domingo Road North East Suite B, Albuquerque, NM
Our Mission: MTS is a leader in New Mexico Theatre that supports and educates our Community through artistic collaboration. Our goals are to: -P... Read More

3011-3015 Monte Vista Boulevard North East, Albuquerque, NM
Vision: Somewhere during the process of bringing a play to life, there is a spark of magic that we hope happens. That magic can’t be predict... Read More

3011-3015 Monte Vista Boulevard NE, Albuquerque, NM
Somewhere during the process of bringing a play to life, there is a spark of magic that we hope happens. That magic can't be predicted or measured,... Read More

210 Yale Boulevard South East, Albuquerque, NM
About Us : Outpost Productions has been a non-profit arts organization since 1988. Since 1990, we've made our home at the Outpost Performance Space... Read More

2900 Carlisle Blvd NorthEast, Albuquerque, NM
About The Vortex : The Vortex Theatre is a venue for classic, contemporary and cutting edge theatre. Our audiences can enjoy wonderful works for ... Read More

622 Central Avenue SouthWest, Albuquerque, NM
About Us: During its early years, the El Rey Theater was a popular movie theater, and also featured "The Hanger" restaurant, as well as several po... Read More 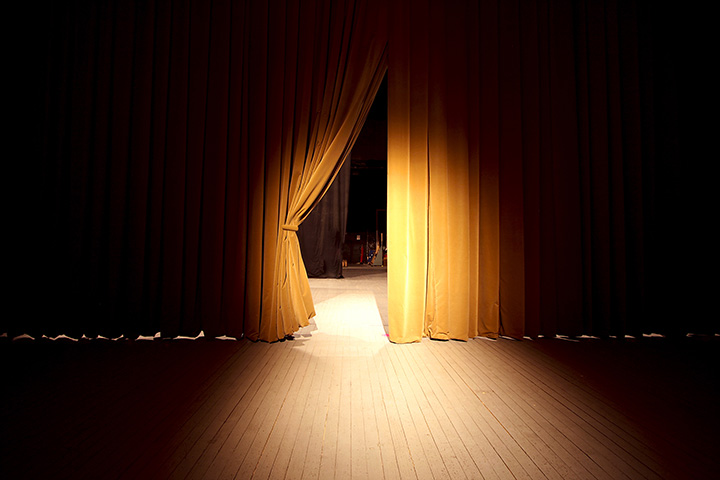 Theatre in the Making

P.O. Box 4751, Albuquerque, NM
Mission Statement : Theatre-in-the-Making is dedicated to the idea that creative and joyful artistry has the power to change the lives of indivi... Read More

P.O.Box 26395, Albuquerque, NM
Mission:Our Mission is to promote public awareness of theatre in the greater Albuquerque area, to encourage the growth of theatre audiences, to fos... Read More