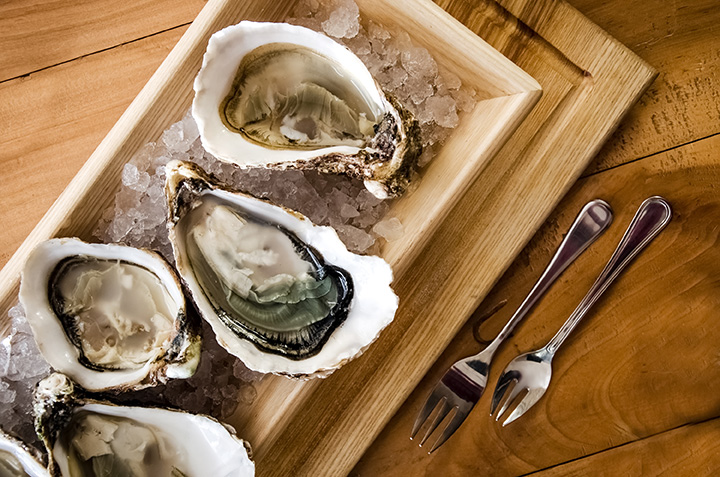 Oysters are one of the world’s greatest delicacies. If you feel like treating yourself, New Mexico plays host to oyster bars and seafood restaurants serving seriously delicious renditions. Whether it’s Blue Point oysters on the half shell or fried oysters in a seafood platter, find only the best at these 10 oyster spots in New Mexico!

A commitment to the philosophy of French cuisine, to enhance rather than overwhelm a dish, is the focus at this chef-owned restaurant. That applies to the chilled oysters, too. They’re served, simply, over ice with lemon, rice wine mignonette, cocktail sauce and horseradish. Pair with a glass of wine off the extensive wine list.

Known for fresh, delicious seafood and Louisiana-style flavors, the oysters here do not disappoint. Selection includes Gulf Coast or Blue Point oysters, on the half-shell, half-dozen or dozen, or Oysters Pappadeaux, baked on the half-shell with crabmeat, spinach and hollandaise. If you like them fried, try the seafood platter, a mix of fish, shrimp, crab and oysters.

For more than 20 years, this family-owned restaurant has been creating extraordinary fish dishes. They’re so good that the restaurant was named “Best of Santa Fe” in seafood for a dozen years. The fresh oysters are served on the half shell by the half or full dozen. They’re a great beginning to an authentic Mexican meal.

This landmark restaurant has stood the test of time for more than 40 years as a go-to spot for surf and turf. The steaks are handcut and the seafood is fresh, including the oysters. They’re served two ways. Oysters Rockefeller come six to a plate and are topped with bacon, spinach and cheese. Oysters Southwestern add the infamous New Mexico green chile to the Rockefeller ingredients.

You’ll feel transported to the California wine country at this sophisticated and contemporary, sun-filled restaurant with a wine list that embodies the best of the Golden State. The oysters, so fresh you can taste the ocean, come singly, by the half-dozen or dozen and are served with a cocktail sauce and red wine mignonette. Enjoy the fresh, high desert air with a glass of vino on the outdoor patio, warmed by toasty fire pits.

Southern flavors are blended with Cajun spices for a unique mix of fare at this restaurant named for the chef behind all of the deliciousness. Oysters are plump, battered and deep fried and are served as an appetizer or meal. Get a sampler that includes fried gator, alligator, shrimp or crawfish. Each comes nestled on top of coleslaw or lettuce and tomato and a spicy sauce.

If you like seafood, and only seafood, this place is for you. Be prepared, it’s fresh but also mostly raw, but expertly prepared. Straight-up oysters come as a half and full dozen, served on the half shell. They’re also served with shrimp cooked in lemon and jalapeño juice.

This casino has a lot happening at it—a beautiful hotel, quarter horse and thoroughbred racing, great live entertainment and exceptional food at all of the on-site restaurants. The Blue Point Oyster appetizer brings a hint of the East Coast to the Southwest. They come on the half-shell with a red wine vinegar mignonette, lemon and Tabasco.

Located in one of the oldest neighborhoods in Santa Fe, the Barrio de Analco, you’ll find traditional, yet elegant food at this well-established restaurant. There’s something about steakhouses and oysters … they quite often seem to the choice for a first course. No exception here. You’ll find them as an appetizer—three, six or 12—all served on the half-shell with a mignonette sauce, bloody Mary cocktail sauce and red chile-horseradish potato chips.

An Irish cantina in the Southwest that serves oysters, generally from the East Coast? Yep. Three cultures come together at this longtime family-owned pub. The fried oysters come on the half-shell with fresh wasabi root, mango salsa and a hot, spicy sauce, a nod to the Japanese influence found at the sushi bar.